You could say I’m ticked.

Actually, I try to write positive stuff, most of the time, but this topic just keeps surfacing for me, so I’ll write about it and call it therapy.

I probably had you at rattlesnakes.  I’ll admit right up front, I’m terrified of them, most any creature that slithers.  If a snake appears in a movie, I’ll leave the room, and likely my heart will be pounding.  (As if it could pop out of the screen).  And I know I’m not alone.  It doesn’t have to be a rattler, although I do find them awfully scary, and to boot, they are poisonous and live in our surroundings.  I don’t care to think about this too much.

I realize for some this is not a big deal, but I know I’m not alone.  Years ago, when my kids were little, our cat brought a snake into the house.  It wasn’t big, but it was one.  That was enough for me, and in terror, I fled upstairs, calling our very brave neighbour who knew no fear to come and rescue me.

She was such a good friend, and in no time I heard her laughing… the snake was quite dead. (the cat had taken care of that).. and I had nothing to fear.  She removed the creature, and I think she laughed all the way home.  Oh well…

A couple of years ago I was walking in my neighbourhood, going down the long stairs to the street below.  Some joggers bounced up and said… “Watch out for the snake!”, and sure enough, just below us a large long snake, with rattler markings was stretched along the stair.  I still shiver to think I could have stepped on it.  But forewarned, we just watched him slither away… and I didn’t use those stairs for a long time afterwards.

Recently I noted (Facebook News!) that there have been more rattlesnake sightings in our area, some along the wonderful Okanagan Trail we love to walk.  I wondered if I would be brave enough to keep walking there.  It helped to talk to a rather sensible friend who told me that if the rattlesnakes were stretched out full length, they could do no harm, it was just when they were coiled you had to stay your distance.  And the trail is wide… so beware of your surroundings!

So I’m trying to be brave… and beware.

Of course there are always pests to be aware of.  Lately, I’ve been aware of an invasive plant that can blind you if you touch it… yikes!… and it seems to be a bad year for mosquitos.  And then there are the ticks, which can carry disease… Ticks could use up another whole blog, but I’m not going to let them.

I had a conversation with some gals at the hospital lately, and said I had a few questions for God.  They were all ears… and had a few suggestions of their own.  Why did God make mosquitoes?  And what are the use of ticks?

And honestly I don’t know the answers to these questions, although we did agree that mosquitos were good bat food… and bats are supposed to be good for something… 🙂

It seems that our broken down world is affected by chemicals and air quality and pests, which can carry disease… we all need to be aware. Sometimes that is downright depressing.

So what is the point of this tongue in cheek dialogue?  Just had to get it out there I suppose!  Oh yes, I think it was therapy!

I do know a few things…

I do know I don’t want fear to dominate my life and keep me from being outside.
I do know the sun comes up every morning, and the beautiful world we live in always surprises me with never-ending colour, variety, new life… it is a gift I delight in!
I do know it helps to laugh at myself…and a sense of humour goes a long way, whatever our fears.

Fear can be crippling.  I admire people who venture forth without a care, this is freedom!  Courage is not the absense of fear, but the acknowledgement of it and choosing to face it.  Nelson Mandala put it this way:  “I learned that courage was not the absence of fear, but the triumph over it.  The brave man is not he who does not feel afraid, but he who conquers that fear.”  (I’m thinking this might be good advice for women too!!)

For whatever we face, those are good words! 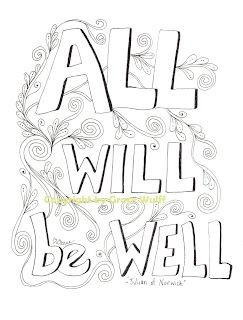