A tribute to my Dad

Many know my dad – he gets around.  At 87, he is more active than most people his age.  He still plays tennis, loves table tennis, he bikes regularly and still drives everywhere.

And he loves to pick cherries! 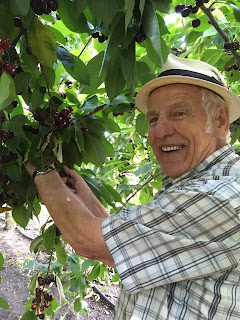 This goes way back, he has always been fond of cherries, and picking them is the best part.  I remember a road trip he took with my son, he must have been around 10, and they drove to the Okanagan to pick cherries.  They created some memories; those two, that trip!

I remember when we picked cherries for 10 cents a pound… it was a great deal back then!  But I’m dating myself….

So last week he drove up – a five hour drive – with my sister, to visit and pick cherries.  He knew the orchard he was going to, he had made it a point to know the names of the owners.   And I think he was sad it took only 1/2 hour to pick the cherries we needed.  I think he could have picked for hours!

As we visited, it was good to catch up.  We always remember mom, now gone five years, and it is my sister now who helps dad process those cherries which he will enjoy over the winter.

Of course, dad is known for much more than cherries.  I realized this again just last week when I visited someone in hospital who remembered dad well in his role as a pastor.  They talked of him fondly and the good memories of visits over coffee and home-baking.

Dad is a social kind of guy and always had a wide group of people he stayed in touch with.  He is known for his pen and paper in his pocket, always jotting down names to remember, people with whom to connect.

As we reminisced, he talked of all the sermons he had prepared and shared over the years.  He has catalogued over 2000! He was a loved Bible teacher too, and I often still hear of those who miss his Bible classes.  But then, he’s still teaching, in the facility he calls his home.

He has always been meticulous about keeping track and remembering, and has written a diary of his activities since he was eighteen years old.  In his retirement years he started reading those diaries and often shared with us what year he was reading and what memories he recalled.  Quite amazing.

One of the most interesting tidbits I heard last week was all about cards.  If you have ever given dad a greeting card – a Christmas card or birthday card, he still has it.  Just so you know.

He told us that each day he picks a Christmas card and another card and as he reads them, he thinks of the person who sent it.  He might be inspired to connect with them.  He believes that these cards are to be cherished because someone took the time to send them.

We are grateful we still have our dad.  In 2011 he nearly died… twice.  It was a tough year, as he spent much time in the ICU and hospital.  But his life is still vibrant and he’s planning for the future.  He’s thinking of a cruise.  He has a list of people to see.  And my guess is that he’ll be back next year, because those cherries will be ripe and waiting.