A New Dose of Courage

This blog on courage is a favourite one of mine to share and was posted on my other blog page on September  7 2011.  It was definitely one I wanted to move to my web page.

Because it tells the story of how God gave me the gift of courage in a particularly difficult season in my life.  When  I need a new dose of courage, it is a good story to recall; a reminder of God’s faithfulness.

I was at Safeway yesterday stocking up on Kleenex tissues, because they were on sale, good for extra air mile points, AND I got 10% off!  Not bad – I love a bargain.

A number of the boxes had the words Courage emblazoned on them, a tribute to breast cancer patients and survivors.  It brought me back to last year when I saw this little box for the first time.  Sometimes it is good to recall stories, to remind ourselves of where we’ve been and what we’ve learned.

In June of 2010 I went to Bowen Island, on a retreat like setting to begin my college experience, studying spiritual formation.   If I were to be honest, I was excited but terrified; it was a huge step for me to take, but it was an open door, and as doors shut behind me, I felt I needed to move forward and enter the future.  I felt fragile; not only had my job just ended, which I mourned for, but I arrived two mornings after my mother-in-law’s funeral, and my hubby was also starting a brand new job that very day.

My dear friend had encouraged me to go, and it so happened there was a car that belonged to her on Bowen Island that she requested I drive back to Vernon.  For those who know me well, I am not a risk taker, I do not enjoy change; and this was definitely out of my comfort zone.  However, it WAS a ride back… and I said of course I would. . .

The week was wonderful and challenging in so many ways, life changing and stretching. . . and the car also gave me a few challenges!  It had difficulty starting, the tires were low and in question, and in the midst of studying and learning, I found myself looking for solutions to this little car that glared at me from the parking lot, as if to say, you can’t do it . . .

At the end of the week, with my sister’s help, we drove through Vancouver, and I was on my own. My brother-in-law checked tires for me and discovered they were quite low, so my imagination and fear were fairly active as I faced the formidable Coquihalla.  But before I left, I admired a little angel my sister had on the table, and looked at the bottom, and what should it say, but “Courage”.  I went on to meet another sister at a restaurant before leaving the Fraser Valley, and wouldn’t you know. . . the restaurant had that very SAME angel figurine on sale.  So I bought it and set it beside me.

I got as far as Hope, and had the tires checked again – a kind mechanic topped up the pressure, and said they were again quite low.  I took a deep breath, and dropped by the church we used to attend there years ago, and was so happy to see my friend there.  I escaped to the bathroom and what should I see?  This Kleenex box with the words “Courage” emblazoned on it.  I had never seen this before, and I was totally amazed. . . was God trying to tell me something??

And so I drove the rest of the way home, aware of God’s presence, the tires holding me up, and feeling blessed by the gift of courage.  I was so touched by how He cared for me personally, I even painted a picture to remind me… but it is easy to re-enter life and forget.

The most amazing thing was when I read in my journal later, and realize that just days before on our retreat, I had written “I looked for courage and I found none”… and there it was. all along.  I’m convinced God loves our honesty, and in his gentleness he gave me the gift of courage.  It is a daily thing – there for the taking.  It is good to remember and reflect and claim it once again. 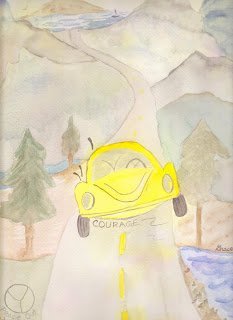