You can’t stamp out the past

We live with our histories.

Even though we may have been incompletely aware of the world around us, how our textbooks told one story, but other stories were silenced.

Our conversation began the other day with a trip down memory lane.  For when I was sixteen I was excited to have a wonderful part time job at our local post office.  It was a unique post office, serving a tourist community that swelled in the summertime and was quiet in the winter time. We were a little village at the head of the very long lake, and there were logging camps down that lake that needed to be serviced by mailboats.

I remember the captain of that boat.  He was loud and colourful with language, picking up the mail, and the postmaster reminded him that I was working there, a preacher’s kid with tender ears.  It opened my world to new places and interesting people.

As was the custom of many who worked in the post office in those days, (perhaps now as well I’m not sure), I collected all the stamps we sold. I carefully placed them in a photo album, and the other day as we remembered this I went to look for it.

Here is part of the first page: 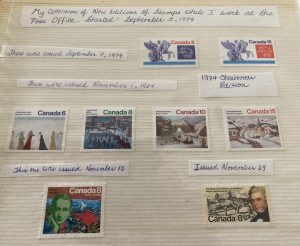 Stamps from the past

But a gasp from my daughter whom I was showing my collection to had my attention!  There is 8 stamps called “Indians of the Subarctic”, issued in Canada in 1975.  Today these stamps would be seen as insensitive and racist.  I wondered, were indigenous people consulted in their creation?  I don’t know.  But I felt shame, even knowing I had collected and saved them.

The next page was no better, I had collected two series from the United States, because in those days when you wrote an article for publication, you were expected to include a self-addressed stamped envelope. (For that rejection letter!).  I don’t even like to say this, but the caption on the stamps was “retarded children can be helped”.  Unbelievable!

I’m grateful that the world we live in today uses (for the most part) respectful language.  Each person has value and should be shown respect. But we have a long way to go.  Awareness is the first step.  Being aware of another, their story, their history is another step that many of us are learning in new ways.

Ignorance is not bliss.  And we don’t stamp out the past.  Instead we can be open to knowing the whole story, to listening to those who have been disrespected, marginalized and in many cases traumatized.  We can express our remorse and sadness over the abuses and coverups of our history, some quite recent.

Does this mean I’m going to shred these stamps of years gone by?  I don’t know.  What I do know is the reminder of where I’ve come from, what I didn’t know was a valuable lesson.   And armed with knowledge, and compassion I pray my words – our words and actions can make a difference.  As we choose to listen with respect, and to love all of humankind, all created in our Creators image.