Perhaps I am. Perhaps I’m not. I’m hearing more and more of this little add-on “ish” in our vocabulary.
Say we want to meet. 12-ish would be fine. Now, do I show up at 10 to? Or 10 after? It is very confusing.
The vagueness of this little word which I even found in the dictionary, can be quite confusing. For instance, when you think of British or Scottish, I don’t think they are vague at all. But one might wonder.
When you say Canadian, it is truly quite clear, I am Canadian. Although even that, without the ish could lead to some discussion. Most Canadians I know have a rich heritage, often a mixed heritage. So does that make them Canadian-ish?

Then there is squeamish, although I have no idea if the squeam means anything.

And what about sheepish?  Did anyone consider the sheep in this add-on? 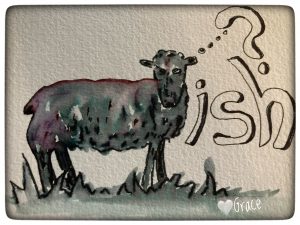 If I say, I am close-ish, what does that mean? Am I too close? Or almost there? Or on another whole note, does it refer to a relationship?
However if someone guesses my age to be fiftyish I’ll take that as a compliment 😀, It is completely incorrect, but I’m okay with that.
Amateurish is another word in the dictionary.  Another vague word, meaning it is something you do… like my art for example, but not my profession.  Sometimes those lines are blurred.
The adding of “ish” to many words seems like a current fad to me, as much as “groovy” was used in the 70’s.  This relatively new addition to our English language seems silly-ish to me. Another hurdle for anyone trying to figure out our difficult English language.
Do you use this word, “ish”?  Or tack it on to your sentences or words for lack of clarity? It could certainly get you off the hook for being punctual, or clear.
Or am I just being peevish?